Images made by programmable drawing machines

The process of making Taitographs differs from that of writing a computer programme. There a notion of the final outcome is usually required  before it can be written.  Neither is it similar to kinetic sculptures, which draw with pen or light, as they are either wholly random, not subject to programming or they are limited in the range of expressive effects.

To put Taitographs in context, they occupy the middle ground between digital computer programming and sculpture installations which make drawings by pen or light. The images are the most important part.

The machines are design tools in that they can be programmed to repeat a drawing with some degree of accuracy. The randomness, termed ‘quasi’ (because it is not a true mathematical random number) is the outcome of a virtually unpredictable sequence of instructions which might take a very long time to repeat. In practice it acts in a similar way to a random event.

The combination of this input with a more deterministic set of instructions is crucial to the success of the final outcome. The ratio of one to the other is largely governed by intuition and experience when the machines are being designed. Clearly the selection process which operates ‘post drawing’ is also critical. These decisions are likely to be influenced by the ‘fuzzy notions’ of intent which existed in the mind during the design and construction of the machine. They are developed and enhanced through feedback from the final evaluation.

The machines essentially explore simple mathematical ratios and linkage character with subsequent post-drawing work done in Adobe Photoshop. Some of the images might  be ‘read’ as being equivalent to hard edge abstract paintings which raises philosophical questions about the nature of art and how it works. This latter assertion rests on the existence or otherwise of a consensus, unless the viewer is happy to accept the 'Duchamp' definition "It is art because I say it is".

Recent work in 2019 has been on 'near chaos'. The machones have been programmed to approach a tipping point where the drawing is almost chaotic but just retains some coherence. This is unexpected  given the inherent unpredictability of a number of D.C. motors running unerd different load and speed conditions. 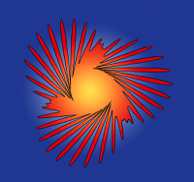 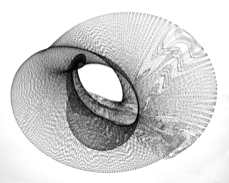 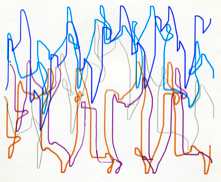 Taitographs are drawings made by analogue machines following simple instructions with an element of quasi-randomness introduced. They are either drawn by pen onto paper or by light into a digital camera. Recent 2019 research has been into 'near chaos'  effects, see Machine 2.